It is easy to see why fashion designer Stefano Ricci, chose to use the pictures that Jack Vettriano had produced and used them for his clothing collection.

Both men work in a similar way. Jack Vettriano, will choose his subject, the people he wants to appear in his pictures and also the theme. Many of Vettriano’s pictures look like actual scenes from movies. We, as the viewer are captivated with these images, because they portray an element of real life.

Looking at the fashion designer Stefano Ricci. He also wants to portray an image which will capture peoples imaginations in a way, that they can visualise themselves wearing the clothes that he has produced.

Stefano Ricci has from an early age been involved in fashion. To say that he was born into it is an understatement.
When Stefano was a child he took a great interest in collecting of neckties (ties). His parents had a sewing workshop which allowed Ricci to sew their own models of neckties. Thus, the first collection of neckties appeared in the familys workshop. When Stefano grew up,his parents began to send him to their studios where the designer began to sew ties.

Here Stefano talks about why he loves what he does:
I became truly fascinated with the ancient concept of weaving: playing with warp and weft. If you get passionately involved in something, you never stop asking questions about it. It is like a fever. Even now, after 30 years, I am still searching for the thinnest yarn available, new colouring systems, new intriguing combinations of old tradition and modern interpretation. It has been like this since I started, and it will be this way for the rest of my life. 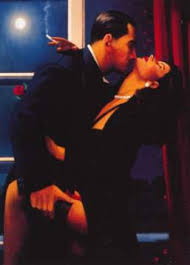 A truly superb tribute and really good example how both of these art forms have come together in harmony.

I absolutely love it.

Who Uploaded This Tutorial?

Recommended Places on the Web

At Stars&Catz you can find qualified local music teachers free of charge: